…well, kinda. It aint pretty, but it’s a start. More below.

(I will discuss more about getting a decent debugging emulator running later, as my VM installation drove me a little insane, after 5 attempts I have it. That will be another post, if I ever get over the trauma. Long story short, if you want Gens or any of it’s derivatives to function properly in a VirtualBox host, DO NOT INSTALL GUEST ADDITIONS. For that path leads to madness. That is all.)

Whilst jumping through hoops trying to get some handy VRAM & CRAM dumps of the title screen for the first graphics hack, I had a bit of a brainwave. The idea was simple – replace all the tiles I’d found of the title with differently coloured fonts, then I could easily see what was reused, and wether I could work around it.

So after the first run with the font copied over, I instantly saw some highly repeated characters, that wouldn’t do. So I blanked these tiles (they all appear as solid pink in the screenshot above). After that, I felt hopeful. There was a good size chunk with minimal repeats! Squeezing in the logo seemed possible!

The two-tone letters are the only repeats in there, so I thought this might be possible to work around. So I opened up TileLayerPro once more, and got my pixel art “skills” on the case. With a picture of the official logo, GIMP, and the grid tool, I got to transposing.

My art “skills” truly deserve the quotes I am using on them. After 30 minutes or so of painting, I booted up the ROM, and this is what greeted me at the opening:- 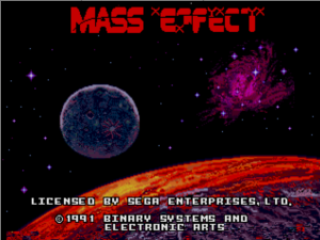 I must’ve misread/misaligned things in my head, as I still have some conflicts. There is a blank tile in an awkward place (inside the first F), some duplicated tiles I can live with, and two duplicated tiles I don’t know what to do with (showing as X and Y). Well, when I start chugging through the VRAM dumps and logs, I may be able to rearrange things.

And, obviously, clean up my tiles. But as a proof-of-concept, I’m quite happy. I just wish I had more time to spend on it!